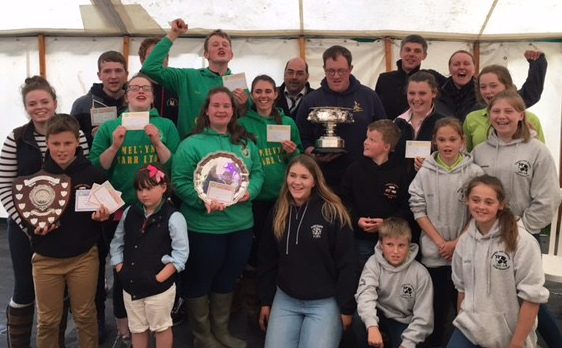 Yorkshire YFC (YFYFC) swept the board at the Northern Area Field Day, returning home with all three trophies.

The day of competitions ranged from horse judging to handwriting and pig judging to pizza shovels. It was hosted by County Durham Federation of Young Farmers (on June 10th) and held at East Durham College’s Houghall campus

Kelly Armitage, YFYFC county administrator, said she was moved to tears when the winners were announced.

“All those who took part were a credit to Yorkshire,” said Kelly. “They pulled out all the stops and did their county proud. To come home with all three trophies was just brilliant – a really memorable moment for everybody who was there.”

Penistone YFC secretary Lauren Howe, who took part in the ladies’ tug of war as well as making an apple strudel and some traditional Austrian lederhosen, said it had been the most fantastic day.

“To be taking part at the Field Day was a big thing, but to end up coming home the overall winners was just amazing,” said Lauren. “Needless to say, we were all in very good form when it came to the dance at night!”

The trophies were for overall winners, stockjudging and non stockjudging competitions. Runners-up overall were County Durham, with third place honours going to Cumbria.