A YOUNG farmer from Yorkshire has been named runner-up in the UK’s best young butcher competition.

Dan attends Leeds City College as part of his apprenticeship with J Brindon Addy in Holmfirth.

He describes himself as “farming mad” since he was a little lad, helping out on a farm near his home in Skelmanthorpe, Huddersfield, since a very young age. He milked cows every day after school and, at the age of 13, also got a Saturday job in a butcher’s shop.

When he left school he completed a Level Three in Agriculture at Askham Bryan College, York, thinking he would go into farming full-time but decided butchery is the way forward if he is to achieve his dreams.

“I’m hoping to get onto the England butchery team,” says Dan, who was talked into joining young farmers by his work colleague Lauren Howe.

“England has a butchery team just like it has a rugby or any other sporting team. The international competitions are amazing with the opportunity to travel to places like Singapore.

“Getting involved in the young farmers’ competitions gave me the confidence to give entering a go.”

“I love building up a relationship with customers and one day would like my own butcher’s shop.” added Dan, who enjoys cooking and experimenting with different cuts of meat, but says a really good quality simple ribeye steak takes some beating.

“I have some sheep of my own – ewes with lambs at foot – and I hope the butchery work will help me to increase numbers and hopefully have some land of my own one day. That would be the dream, to rear my own livestock to sell in my own shop. I’m so grateful to J Brindon Addy’s, my tutors at college and to Lauren for getting me to join young farmers!” 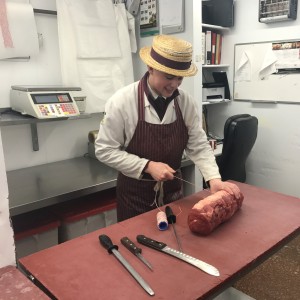