For the second year now, the Yorkshire and East Riding YFC Joint Great Yorkshire Show Committee have held a debate as part of their programme at the 2017 show.

As topical as Brexit is, we thought we would go for a topic that would attract a range of people, and not the dreaded word that is on everyone’s lips!

The debate was chaired by BBC Radio 4’s Farming Today presenter Charlotte Smith, who is the new president of the National Federation of Young Farmers’ Clubs, saying she would have been in trouble with her mother if she hadn’t made the journey from London to Harrogate for the Great Yorkshire Show.

“I was really flattered to be asked,” said Charlotte. “I’m always going on about involving the next generation and how farming needs to widen its appeal so supporting the young farmers’ movement is important to me.”

Charlotte did add though, that her mother – who lives near Dewsbury – would have had a “sharp word or two” to say if she hadn’t accepted the invitation to the Great Yorkshire.

James Mills said the bottom line was that “If a farmer isn’t in the black he can’t go green”, with Mr Forbes Adam an advocate of farmers needing to be savvy about balancing the role of countryside stewardship with making a profit; urging young farmers to spread the message about the good work they do.

The controversial subject of Glyphosate was touched on, with one young audience member asking about pesticides killing bees. John Craddock and Michael Wood were joined by the other members of the panel in voicing fears about ‘false news’ and the damage that can be done to farming’s image, especially through social media and with the strength of cash-rich lobbying parties.

All panellists highlighted the importance in farmers promoting all the good work they done in respect of conservation and the balance between food production and the environment. 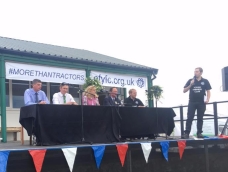